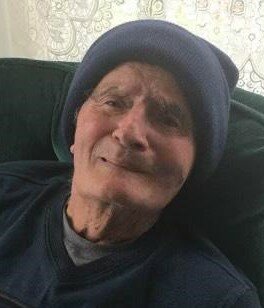 Please share a memory of Lawrence to include in a keepsake book for family and friends.
View Tribute Book

Lawrence Godown, 93, departed this life from the home he loved at 10 Cameron Avenue, Hornell, N.Y. on Thursday, January 5, 2023, from complications of a recent heart attack. Born on the Gallmeyer farm in Alexandria Township, NJ on December 22, 1929, he was the son of the late Wilbur and Frieda (Gallmeyer) Godown. He graduated from Frenchtown High School.  Larry was a longtime resident of Hornell and previously lived in Independence NY, Coudersport PA, and Allentown, NJ. He is preceded by his father, mother, wife Doris, son Rodney, great grandson Lucas and brother Donald Godown.

Larry had farming in his blood, planting and harvesting crops on his grandparent’s farm during his high school days.  He married his roller skating partner Doris, on her birthday, March 4, 1950, at her church in Washington NJ.  They raised 7 children and were married for almost 71 years.  They lived briefly on the Gallmeyer farm then in 1951 bought a farm in Independence NY. In addition to farming, raising chickens, beef cows, pigs and crops, Larry worked as a machinist at Worthington (Turbodine) in Wellsville NY.  In 1978 they moved to Coudersport, PA, to take over a chicken farm.  They moved to Allentown NJ in 1981,where Larry worked for Princeton Nurseries’ as a welder, equipment designer and mechanic.  He retired and moved to Hornell in 1993, where they spent the remainder of their lives. Dad was affectionately dubbed the “Mayor of Cameron Avenue” and enjoyed many hours sitting on his front porch surveying his street and talking with anyone who walked by.

Friends wishing to send a remembrance may visit www.brownandpowersfuneralhomes.com or on Facebook @brownpowersfh. The family is being assisted by Gerald R. Brown, Director.

Friends and family are invited to calling hours at the Hornell United Methodist Church from 9:30 AM– 10:45AM with a Memorial Service immediately following with Pastor Lenny Fuller officiating.

The family would like to thank Giovanni’s Restaurant for their kindness and patience with dad over the years. Contributions in memory of Lawrence can be made to the Humane Society at 7649 Industrial Park Road, Hornell, NY, 14843 or to the United Methodist Church of Hornell, 7528 North Main Street Extension, Hornell, NY 14843.

To plant a beautiful memorial tree in memory of Lawrence Godown, please visit our Tree Store

Look inside to read what others have shared
Family and friends are coming together online to create a special keepsake. Every memory left on the online obituary will be automatically included in this book.
View Tribute Book
Services for Lawrence Godown
There are no events scheduled. You can still show your support by planting a tree in memory of Lawrence Godown.
Plant a tree in memory of Lawrence

Share Your Memory of
Lawrence
Upload Your Memory View All Memories
Be the first to upload a memory!
Share A Memory
Plant a Tree