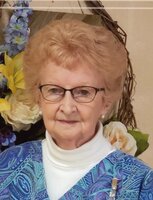 Born in Campbell, New York, November 26, 1932 she was the daughter of William and Florence Cook. She has made her home in Hornell since 1956 and had attended the First Baptist Church in Hornell.

Nedra had been employed at the Tuttle and Rockwell Store in Elmira, for DYCO in Hornell, and over 20 years as a CNA at the Hornell Gardens.

She was predeceased by her parents, her husband, Richard J. Steitzer Sr, three sisters, Roberta, Juanita and Gloria, and her brother, Ranger Cook.

To send a remembrance to the family, please visit www.brownandpowersfuneralhomes.com or on Facebook@brownpowersfh. The family is being assisted by Gerald R. Brown, Director.

Honoring Nedra’s wishes, there will be no calling hours. A private Memorial Service will be held for the family at the Bender-Brown & Powers Funeral Home in Hornell. Deacon Robert McCormick will officiate.