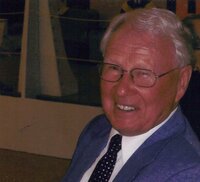 Gerald Donald Zirkelbach Florida/ Almond Gerald Donald Zirkelbach, 94 of Lakeland, Florida went home to be with the Lord on June 29, 2021 at his home. Don was born in Hornell on August 6, 1926. He was the son of Serena (Stephens) and Donald Zirkelbach. Don grew up on a small farm in Almond and started school at the Alfred Almond School(later the chair factory) When the new school was completed, he attended there. At age 18, Don enlisted in the US Navy. He took his basic training at Sampson Naval Base on Seneca Lake. On December 28, 1944, he married Alice Spaulding from Hornell before he shipped out to the Philippines arena. After WWII ended, Don ,Alice and family made their home in Hornell. Don worked for Nabisco, Millbrook, Interstate Brands & H&S Bakery. With the various bread companies, the family left Hornell in 1964 and moved to Syracuse, Albany, Buffalo, Kentucky and Maryland. Upon retiring, Don and Alice made their home in Rochester and Lakeland Florida. Don was predeceased by his wife; Alice, parents; Donald and Serena Zirkelbach, granddaughter; Tracy Zirkelbach and his sister Patti Lyke-Dye. Living are his son; Richard (Nancy) Zirkelbach of Scottsdale, Arizona, daughters; Joan Zirkelbach of Lakeland, Florida, and Barbara Chiariello (Peter) of East Rochester, Granddaughters; Lora Andrews of Scottsdale, Arizona, Tara Schuh (Remko) of the Netherlands, Erica (Jeremy) Fulford of Valrico, Florida. He had 3 great granddaughters; and 2 great grandsons. Don is also survived by a sister; Marilyn (Jim) Habern of Lakeland, Florida. Special cousins; Jeannie and Bob Brown of Cortland, and Larry Stephens of Canisteo. A Memorial Service for Don will be held at the Almond Community Church on September 12, 2021 at 2 PM with Pastor DuMond officiating. Those wishing to make a contribution in Don’s memory, may do so to the Almond Community Church Sunday School or a charity of one’s choice. To send a remembrance to the family, please visit www.brownandpowersfuneralhomes.com or on Facebook@brownpowersfh.