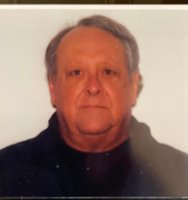 Charles Edward McCullough Belmont/Angelica Charles Edward McCullough died June 21, 2021 shortly after arrival at Jones Memorial Hospital, Wellsville, NY. He was born February 15, 1954 in Buffalo, NY, to Charles C. and Carol Grant McCullough, the eldest of 6 children. On October 6, 1974 he married Cynthia Austin McCullough who survives. A 1972 graduate of Orchard Park High School, he had little tolerance for authority of any kind. When told he had cut too many classes to pass Chemistry without a 100% on the regents, he read the text the night before and accomplished that goal. Charlie was employed by Howard Johnson's Restaurants as a manager in many NYS locations. He worked in Liberty, North Syracuse, Oneonta, Buffalo and Norwich. He often became frustrated by the amount of time it took to have his ware washing equipment repaired. He taught himself how to repair and re-program dish machines. The Diversey-Wyandotte repairman took note, and told his senior management person about this feat. Shortly after, Charlie went to work for Wyandotte as a sales/service representative. He worked his way up in the company and in 1985 was promoted and transferred to St. Louis, Mo. He eventually formed his own company, Cardinal Chemical. In 1998 he moved home to WNY where he found work with Proctor and Gamble, his favorite job. Charlie retired from P&G on March 30, 2020 and hoped to wait the mandatory 1 year and return in some capacity. Charlie loved his job with P&G, and was the life of the party at company trainings, once dressing as a wizard to portray what customers expected of sales/service workers. Surviving including his wife are his daughter Monica McCullough, his son-in-law, Tom Kicior, his mother- in- law, Norma Austin (late Wesley). brother- in- law Michael (Linda) Austin, his siblings Teri (John)Strait , James McCullough, Joan Paxon (Bob), Sue Hendrickson, Cheryl (Louie) Loveless. Aunt Nancy (Dale) Hansen, Jim Strickland (late Aunt Judy), Uncle David Grant (Mary Alice), Uncle Kevin Quealy (late Aunt Marg), special cousins Barbara Cooley, Susie Allenbrand and Linda Sherwood, many nieces, nephews and cousins. Charlie was pre-deceased by his parents ,his grandparents Evelyn and Louis Grant and Bessie and Clinton McCullough, his step-father John Somogye, Uncle Louis Grant, special Uncle Dale Grant, Aunt Geri ( Rick)Alger, brother in law James Austin. Memorial service 10-6-2021 St. Paul's Episcopal Church Angelica NY. Family present at 10, service at 11:15. Memorials if desired to Bernard's Beagle Rescue PO 1739 Cicero, NY 13039. Funeral arrangements are with the Brown & Powers Funeral Home in Angelica, and the family can be left condolences on www.brownandpowersfuneralhomes.com or on Facebook @brownpowersfh, the family is being assisted by director Chester A. Gosper IV.