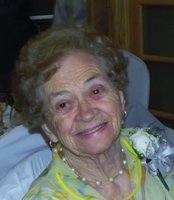 Doris Thelma Aylor Tucker Angelica Doris Thelma Aylor Tucker of Angelica, NY, passed peacefully in her home, surrounded by her family on Wednesday, June 3, 2020 after a long illness. Doris was born on Windfall Road in the town of Amity, NY on July 24, 1920, the daughter of Charles David and Prudence Lovina Brown Aylor. Doris resided in, and was a graduate of Belmont Central School. On December 4, 1937 she married Roy I. Tucker in Angelica where Doris lived her lifetime. Roy predeceased her on April 20,1991. Her first employer was Spear Resistor in Angelica, NY from there Doris was employed by Acme Electric in Cuba, NY from where she retired as a scheduler. Doris’ passion was her family. She was a true matriarch who loved fiercely, and was loved dearly. She was a homemaker who enjoyed baking, reading, sewing, knitting and crocheting. She also was a loyal New York Yankees fan. She was a member of the First United Methodist church and the Ladies Progress Club in Angelica, NY. Surviving are her five children; Marilyn (Richard) Warner of Angelica, Larry (Daryl) Tucker of Belmont, Janet (Paul) Harrington of Angelica, Bruce (Nancy) Tucker of Angelica, and Alfred (Sylvia) Tucker of Cuba, NY. Doris was a proud and loving grandmother to her 15 grandchildren, Laurie Lyon, Jeaneane Finnemore, Pamela George, Kimberly Lombardo, Tracy Petrichick, Jacquelyn Bainbridge, Paul Harrington, Steven Tucker, Christelle Helbig, Angela Smith, Yvonne Tucker, Jenice Simpson, Richard Warner, Susan Weaver and Anne Koch, her 33 great grandchildren, 14 great-great grandchildren and many nieces and nephews along with a special niece, Cheryl Aylor Steadman. In addition to her parents, Doris was predeceased by her brothers, Lawrence Aylor, Leo Aylor and Francis Aylor; and grandsons, Michael Tucker and Roy D. Tucker, as well as a son in law Richard Warner. The immediate family held a private viewing and a graveside service was in the Until the Day Dawn cemetery in Angelica. A memorial service will be held at a later date. Memorials may be made to the Angelica Free Library, First United Methodist Church in Angelica, Angelica Rescue Squad or the Hart Comfort House in Wellsville, NY. The family is being assisted by Chester A. Gosper, IV, Director of the Brown and Powers Funeral Home, Angelica, NY. To send a remembrance please visit www.brownandpowersfuneralhomes.com , or on Facebook @brownpowersfh.