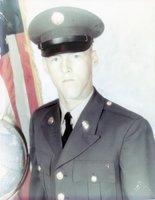 Clifford K. "Butch" Amidon Jr. Arkport Clifford K. "Butch" Amidon Jr., 70, of County Route 46, Town of Fremont, passed away Tuesday (January 7, 2020) at his home. Born in North Hornell, NY, November 1, 1949, the son of Clifford and Helen Morey Amidon Sr., he had resided in this area all his life. He was employed as a carpenter in construction, as a truck driver for the former Saxton Trucking in Hornell, and as a truck driver for the Hornell Evening Tribune. Butch served his country as a member of the United States Army from 1969-1971 during the Viet Nam War. He especially enjoyed woodworking and camping. He was predeceased by his parents, his brother and sister-in-law, Richard and Bella Amidon. He is survived by his sister- Susan (Bruce) Smith of Arkport, and his brother; Ronnie (Mary) Amidon Sr. of Arkport, several nieces and nephews. To send a remembrance to the family, please visit www.brownandpowersfuneralhomes.com, or on Facebook@brownpowersfh. The family is being assisted by Gerald R. Brown, Director at Bender-Brown & Powers Funeral Home of Hornell. Honoring Butch's wishes, there will be no calling hours or services. Burial will be in Heritage Hill Cemetery, Arkport. Friends wishing to remember Butch are asked to consider a memorial contribution to the Fremont Fire Department, PO Box 462, Arkport, NY 14807..